Holy Trinity’s pastor, Father Francis Ostdiek, was a very well rounded individual. Father Ostdiek knew the importance of a good education and it was his desire that Holy Trinity Catholic School become one of, if not the best, Catholic school in Des Moines. Father Ostdiek himself was a teacher. As a teacher, he knew that the there was no way to put a dollar value on a solid education. It was this philosophy of education which served as the benchmark for Holy Trinity Catholic School as the years went by, and the number of students continued to increase.

In 1937 there became a desperate need for additional space to accommodate the growing student population. Because educational excellence was so important to Father Ostdiek and the parishioners of Holy Trinity, a “temporary” church building was added on the south side of the current church / school building. Sacrificing their own church building in exchange for the capability for more students to attend class, the school now had the capability to house approximately 400 students. For the next several years, students who attended Holy Trinity Catholic School were blessed to receive one of the finest educations in the city of Des Moines.

Excellence in Catholic education is Holy Trinity Catholic School. In 1947, six additional class rooms were added west of the current church building. The number of students educated continued to increase year after year and in 1985, the portion of the school building, which currently houses the gym, lunch room, media center and middle school classrooms, was completed.

Due to the dream, vision and desire for excellence in Catholic education, coupled with tremendous sacrifice on the part of many, Holy Trinity Catholic School continues today, heading into 100 years, as one of the premier Catholic schools in Des Moines. 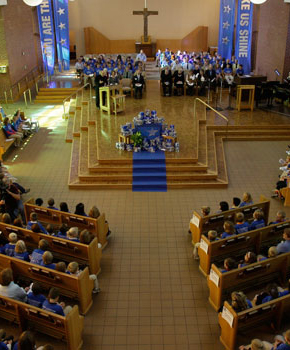